People vs. the digital campus and investors 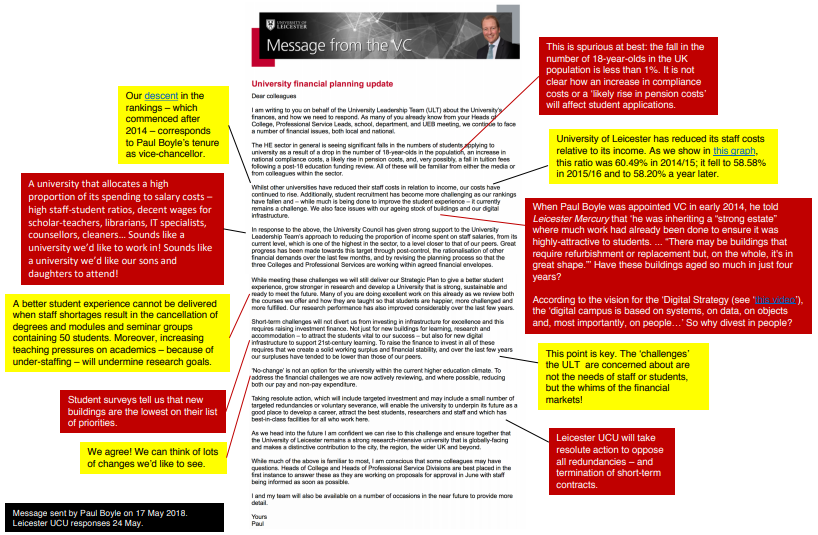 Last Thursday (May 17), Paul Boyle sent an email to all colleagues on behalf of the University Leadership Team (ULT). The vice-chancellor announced that – only two years after the last ‘manufactured crisis‘ – the ULT had decided to embark on another campaign of redundancies – compulsory as well as voluntary. This is on top of a recruitment freeze and concerted efforts not to renew short-term contracts.

First, our preliminary rebuttal of the ULT’s case for cutting staffing at our university. Over the next few weeks and months we will be diving back into the University’s finances and studying in greater detail the ULT’s decisions. If you would like to join this effort, please get in touch! (Our address is ucu[at]uculeicester.org.uk)

Second, Leicester UCU held an emergency general meeting yesterday to discuss the ULT’s latest aggression.  More than 80 members attended. The motion we passed – unanimously – is copied below. In a nutshell, the mood was angry, but upbeat.We are furious at the way our University is being (mis-)managed by its current leadership. Many of us are worried about our own jobs, but we are also worried about our students and the university’s future. But we remember how easy we found it to pull apart the ULT’s financial arguments in 2016 and how they were forced to quietly backtrack. We remember how quickly our petition of no-confidence in the vice-chancellor gained almost 4,000 signatures. The memory of the recent strikes is even fresher. As we all know – and as most of us experienced – our branch was one of the most active in the country during the pension strikes. We gained several hundred new members. So we know that we are stronger now – and university management in even more disarray – than two years ago. The motion we passed calls for a (written) commitment from ULT that there will be no compulsory redundancies and that all short-term contracts will be renewed (unless a bona fide ‘business case’ can be made). If no such guarantee is provided, then the motion commits us to ballot for sustained industrial action that would commence from mid-September.

This EGM rejects the University Leadership Team’s (ULT) case for a significant cut in the staffing budget over a two-year period. We believe the ULT’s stated objective of reducing the proportion of income spent on staffing costs by five per-cent to a notional ‘sector average’ is an inappropriate target for the University given its relative small size; research-intensive orientation; and provision of a sizeable medical school facility.

This EGM believes that ULT’s planned staffing cuts will lead to job losses among all groups of staff, but especially those on centrally funded fixed-term contracts. It will also result in an increase in workload intensification for remaining staff due to the ULT’s de facto jobs freeze on nearly all vacant posts. This will put teaching staff under severe strain to deliver the University’s statutorily guaranteed suite of programmes thereby damaging the quality of learning and teaching, and most likely result in a worsening of the University’s NSS and TEF ratings.

The resulting workload intensification together with the further damage to already low staff morale will also undermine the capacity and quality of research and scholarship in the University, which is especially pertinent as we are about to enter the intense two-year run-up to the REF2021 census point. In addition, given it is only two-years since the last attempt by ULT to make hundreds of staff redundant, the latest plans are already exacerbating the general sense of job insecurity throughout the University.

This EGM calls upon the ULT to give the following written guarantees by 1st June 2018:

This EGM resolves that LUCU undertake the following if the ULT does not give these two guarantees by 1st June: