Despite the snow starting to fall and below freezing temperatures, day 4 saw our biggest turn-out of protesting staff and students yet. Has to have been more than 200.

The Socialist Students society joined us early on the picket line to gather signatures on a petition in support of striking staff. 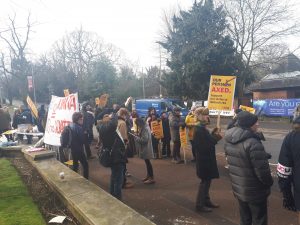 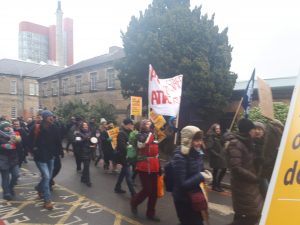 We asked him if he would join the other 19 vice chancellors who had already publicly called on UUK to reopen negotiations without preconditions or otherwise offered support for the strike action. He said No. 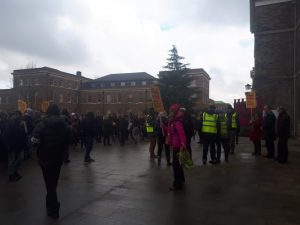 We asked him if he acknowledged that the valuation and methodology underpinning UUK proposals were wrong. He said No.

Our students asked how he could defend the appointment of David Willetts as Chancellor given his statements about women and LGBTQ rights. He said Willetts had changed his mind on these issues, and that was good enough for a #heforshe university. We disagreed.

We asked him if would retract and apologise for threatening staff with 100% pay deductions for working to contract on non-strike days. He clarified that the University had said it *could* do this, not necessarily that it *would*.

He conceded that all strike-deducted pay would go to the University’s student hardship fund.

Not being best pleased with the VCs answers (except the last one), and not wanting to lose track of #whereispaulboyle after such a protracted effort to find him, we decided to follow him to a meeting of the University Executive Board at College Court. 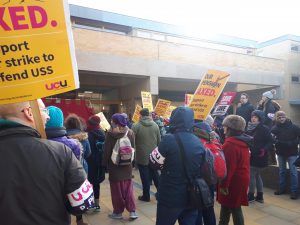 As members of the UEB arrived, students and staff together greeted them with loud chants of “support your staff” and once they were all inside we availed of a newly arrived batch of whistles to create a wall of sound that guaranteed the meeting would hear our collective voice.