Strikes 2020: Day 8… Another riotous and righteous day on the Leicester university pickets 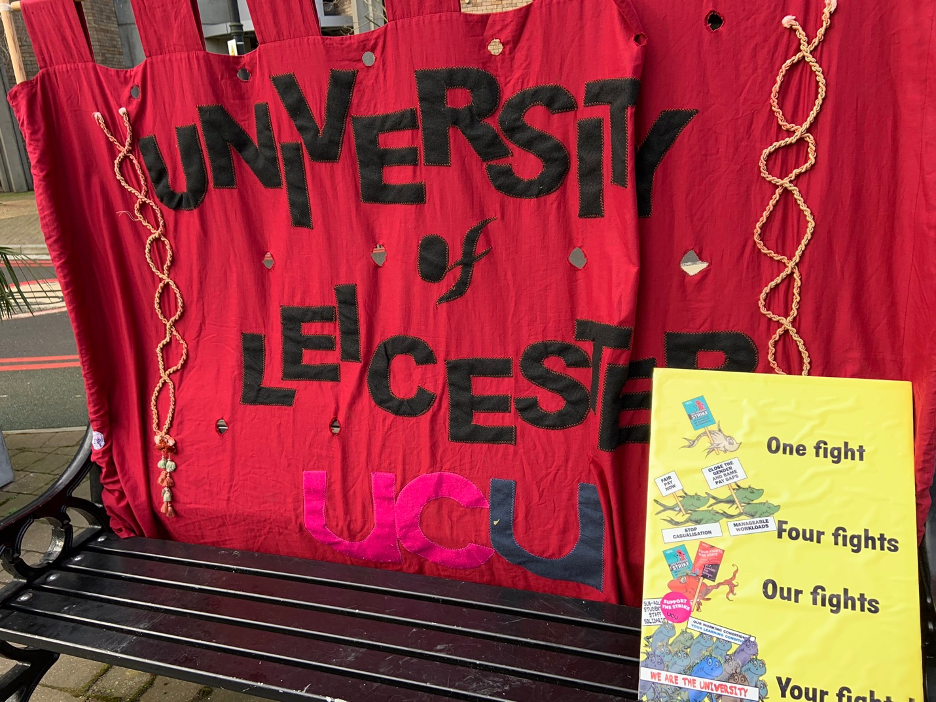 Picketing started bright and early at Univeristy of Leicester on Day 8. From what felt like the crack of dawn, there were gooey baked goods, brand new leaflets, and a sense of determination on the line. A generous supporter stopped by the pickets and though she didn’t leave her name, we were very buoyed up by the many sweet treats she brought!

Today’s theme was international solidarity. Our members have connections to struggles all over the world and today was a great opportunity to learn from each other. In Zambia and Zimbabwe, universities are also currently on strike and colleagues in Zambia haven’t been paid so far this year. Postgraduate student workers at the University of California Santa Cruz, overburdened by housing costs, have been on strike demanding higher pay, and have been faced with arrests and dismissal. French workers and citizens are continuing strike and protest action across both the private and public sectors in defence of pensions, and building on the waves of protest that have gripped France since the Yellow Vest [Gilets Jaunes] movement began in 2019.

Today’s teach out was led by UCU member and Leicester alum (Human Geography) Adam Barker (@AdamOutside), who helped explain the movement of the Wet’suwet’en (#WetsuwetenStrong) which is taking place in North America.

Across that continent, Indigenous communities, groups, and allies are engaging in protest actions in support of the Wet’suwet’en nation, who never surrendered land or sovereignty through war or treaty, and whose claims over their traditional territories were upheld in a 1997 Supreme Court Decision. Yet Wet’suwet’en people and their supporters have been forced off their traditional homelands by federal police enforcing an injunction on behalf of a company wishing to build a fossil-fuel pipeline through the area. This has in turn sparked a wave of blockades and protests from Indigenous land defenders of many nations, across Canada and around the world. This situation continues to evolve, and Adam encouraged all UCU members to investigate and share information as it becomes available, and to donate to one of the legal funds for land defenders. Adam, along with his tambourine enthusiast partner are planning events in support of the movement in Leicester over the coming weeks: swing by the pickets or drop them a message if you’d like more information.

During our teach out, members noticed a small drone hovering overhead. University security was alerted and supportive (thanks, Natalie!), and a word was had with the ‘pilots’ who assured us nothing was being recorded and who are now very clearly aware that unregistered drones are not permitted in the park, or, indeed, Leicester.

Finally, it’s been mentioned more than once that our pickets can be heard from quite a distance. We, of course, take this as the highest compliment. Today a new drum arrival at the Victoria Park picket invigorated our rhythms and showed off some serious technique!

As it emerges that Russell Group universities have acknowledged the widespread negative impacts of casualization – while simultaneously refusing to make meaningful changes in practice that could ameliorate the problem, leaving precarious staff to absorb even more damage – it must be said that there was a new level of frustration and renewed focus evident on the line. Now, more than ever, we need a strong presence on the pickets to show our unity and determination and to bring this dispute to a satisfactory resolution.

So, come stand, come leaflet, come drum, come drink coffee tomorrow and make the last day of this week a powerful statement of our resolve.

[If picketing seems daunting, don’t worry – there are spaces for everyone whether you need quiet/calm pickets, prefer interactive or noninteractive activities, enjoy or don’t prefer animals, etc. Message @EmmaJBL and she’ll be happy to help!]