The green and the unseen

The scandal about the Home Office’s mistreatment of the Windrush generation has dominated the news in the past week. Students at UK universities have also been victims of the ‘hostile environment’ as this story in the Financial Times makes clear, and British universities have themselves become ‘enforcers‘. The University of Leicester is complicit. At the beginning of the 2016-17 academic year it introduced a new electronic Attendance Management System, ‘Touch GREEN to Be SEEN’. In this opinion piece, István Örkény and Andrea Rossi, unpack its hidden logics.

We are conditioned to think that green is good. Green fingers make plants grow, a green light lets you go, whilst ‘going green’ celebrates sustainability. Even Coke’s latest fizzy drink, supposedly healthier with less sugar, is green — it’s called ‘Life’. It’s not surprising then that when universities encourage students to bow towards a green light-emitting diode — tapping in at lectures and seminars with a student card to record attendance — they mostly oblige. Touch green, be seen!

But green, the nature-friendly colour, also acts as camouflage. Like troops in the jungle, colour-branded techno-capitalism on university campuses hides the uniform of the occupier from plain sight. According to a popular, though certainly incorrect, etymological explanation of the early-1900s, the word gringo originated during the British and American occupation of Mexico in the 19th-century. Gringo, it was said, stands for ‘green go!’, an emphatic exclamation shouted at US troops by Mexicans. The dark side of green would certainly have been seen. But on today’s campuses, like in the humbug Emerald City in The Wizard of Oz, everything is measured wearing green-tinted glasses. Green-branded global coffee chains serve students whose greens in the form of tuition fees are raked in by universities. Students should be seen, students should be green — or go.

Go is meant quite literally here. ‘Go home!’ In fact, Touch GREEN to be SEEN has its own unseen, a whole ecology of (in)visibility that can show something only by hiding a considerable part of its mechanisms. We see the Touch GREEN to be SEEN signs in every lecture theatre, seminar room, and laboratory. What we don’t see are the emails sent to ‘international students’ (a category which might soon include EU students) in which they are informed, with ‘kind regards’, of having been withdrawn for non-attendance. And what even the recipients can’t immediately see, as those emails carefully leave this aspect implicit, is that termination of their studies implies the suspension of their visa and… their possible deportation. What we can’t see on the Touch GREEN to be SEEN sign is how this policy fully represents a direct extension of the contemporary dispositive on migration, the same racist strategy of discrimination and exclusion that most of us abhor when made visible through Trump’s rants on walls and deportations. Let’s face the unseen then: Touch GREEN to be SEEN is racist and xenophobic; Touch GREEN to be SEEN promotes a world of borders, deportations and violence that is constitutive for a system based on exploitation and inequality. It is also time to face the truth that we habitually acquit our ethico-political duty as tutors by alluding to an instrumental sense of professionalism.

But the ultimate unseen is the whole set of operations that reproduce the unseen, those tactics that make sure that the unseen remains unseen. The wording used by the University’s “Policy on Attendance at Timetabled Teaching Events” is particularly telling in these regards. Point 3.2 explains the rationale:

The mechanism here is quite subtle. The attendance monitoring policy’s raison d’être is to maintain a system for managing migrants in line with the regulations set by the Home Office. But the policy is justified in terms of pedagogy. In fact, before confessing its racist and imperialist origin, a section titled ‘Principles’ displays the pastoral and pedagogic intentions that ought to underpin any university’s relationship to its students:

This policy supports the aims of the University’s Learning Strategy, which contains a commitment to deliver a student experience that engenders success, supported by a stronger focus on retention and engagement and on identifying and supporting students who are at risk. We believe that for campus-based students attendance at scheduled teaching events is a prerequisite for successful engagement with their studies and achieving the best possible outcomes. (Our emphasis.)

We might be naive enough to think that this ‘principle’ of attendance that allegedly results in successful engagement (constructive proposal: rename the policy to the more appealing Touch GREEN to be SUCCESSFUL) is an additional positive outcome on top of fulfilling the legal requirement of UK Visas & Immigration. But really we think is nothing more than an attempt to sugarcoat the spectre of the Home Office, by appealing to a discourse of success, engagement, commitment and employability.

And if we still want to believe the rosy narrative of attendance as a prerequisite for ‘successful engagement and achieving the best possible outcomes’, we should wonder why the University keeps promoting its distance learning programmes. Or why it is so keen on ‘lecture capture’. The Netflixisation of University teaching contains a perverse temptation to ‘stay home and chill’ or catch up with a lecture while pedalling away in a sports facility newly built to support ‘student experience’ — and the spectacular NSS scores that are assumed to come it. It is only international students whose success is predicated on swiped-in on-campus presence. The savvier international students are already aware of the wedge such a policy drives between them and their UK (and, for now, EU) peers: they admit to coming to class before a deadline or after a party just because they can’t stay at home like their mates. How is one supposed to facilitate study under such circumstances? It’s not too hard to imagine a dystopic future in which immigrant students are compelled to attend on-campus screenings of ‘lectures’ recorded by immigrant academics formerly employed on casual contracts and now deported after being made redundant! 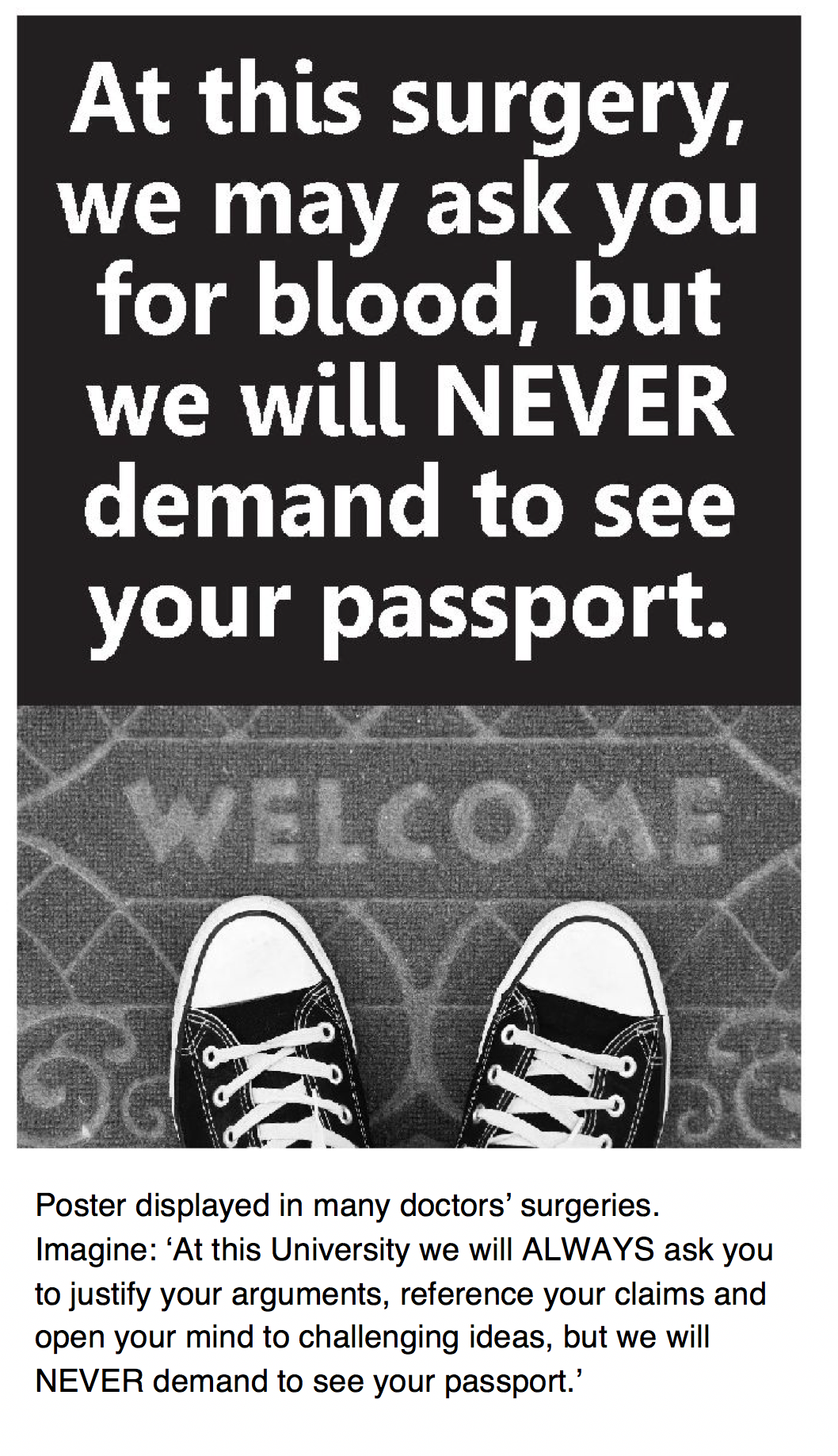 This provocative scenario helps us to analyse another of attendance monitoring’s unseens: the problem of work. The introduction of the Attendance Management System, with swipe cards and those friendly-coloured card readers has been presented as ‘an online tool to more effectively record student attendance, which will be easier and less time-consuming for both staff and students’. Senior managers try to depict themselves as benevolent shepherds caring for their workers. But, we cannot fail to read the introduction of this technology as a reaction to the (unfortunately scattered but still successful) resistances of tutors and faculty who objected to the increased workload generated by the manual keeping of registers. Unfortunately, the new Attendance Management System does not reduce workloads, as the upgrade of the technology has coincided with an upgrade of the whole apparatus of control, surveillance and, therefore, deportation. Moreover, there have been many indications recently that the system may not work as reliably as advertised. More generally, we argue that no such system is reliable enough to determine the deportation of a student.

As the system has been introduced, so the responsibilities of seminar tutors have been extended. We are encouraged to report: any students who have had any issue with the monitoring system (e.g., card does not “go green”, card has been lost, broken, forgotten); any students who we find to be falsely signing themselves or a fellow student in; and any students registered as attending who are not actually present at the seminar (MS Policy for Staff). Moreover, should a student be withdrawn for non-attendance, a seminar tutor may be requested to provide evidence of attendance and answer questions to support (or not) the student’s appeal. We are no longer only academics — or, worse still, the figure of the academic has incorporated another identity – that of the border agent.

Neither our payslip nor our contract mentions our contribution as border agents. Therefore, we need to conclude that some of the paid hours that were originally planned for research, teaching preparation for teaching and so on have been converted into hours of border surveillance (without the pleasant sea breeze or views of the White Cliffs of Dover). Or, and this is possibly the more realistic expectation from UK Visas & Immigration and, consequently, university managers, we are actually operating as border agents for free. This is paradigmatic for academic staff employed through Unitemps for instance. All that time spent reporting issues with the card, surveilling illicit swipers, providing evidence for students under investigation, and so on and so on, are all hours that cannot be claimed: no claim, no pay!

At University of Leicester – as at many other universities in the UK — seminar tutors are the frontline of the attendance monitoring. In a class of 15–25 students it is simply easier to see whether there are fewer students than those marked as present in the monitoring system. But here another side of the unseen gains more visibility. Who are these seminar tutors? Mostly they (we) are on some form of casualised, precarious contract: we are Graduate Teaching Assistants, Associate Tutors, Unitempers. But more. Many of these would-be surveillors of the dangerous migrant swiping three cards at once are themselves (ourselves) migrants.. A migrant in charge of controlling migration would the ultimate victory of a racist system!

But seminar tutors and other teaching staff are not the only ones who are complicit – whether willingly or unwilling – in this border-control system. So are our professional services colleagues. Those ‘student-facing’ administrators who must deal with and often adjudge students’ pleas about faulty card readers, faulty cards and cards misplaced or forgotten – and remember the vast majority of such pleas come from ‘international’ students, i.e. those whose presence on this island is at risk. But also those more senior colleagues, who labour away in the heart of the castle. In our experience – reinforced after standing side-by-side on picket lines with so many earlier this year – such individuals did not become university administrators because they wanted to become border guards or police officers. Thus we suspect even the authors of the policy documents we mention above are quite cogniscant of their duplicitious nature and are distressed that their job now involves ensuring institutional compliance with such foul Home Office policy.

But perhaps now is the time that vice-chancellors might join us and say, Enough! If academic freedom is to mean anything, then a university must be a place of sanctuary to all of its citizens – not only, though of course including, the conspicuously underprivileged selected by the PR machine. We, for our part, firmly declare: We are scholars and teachers; we will never be border guards!