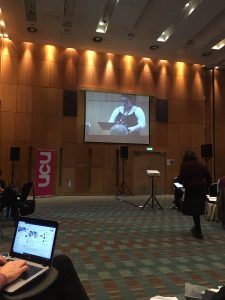 Our union’s Congress Business Committee (CBC) has a seemingly thankless, but nevertheless essential, job. Its task is to sort the dozens of motions submitted each year to annual congress, filter out those that are ineligible for some reasons (submitted too late and don’t satisify criteria to qualify as ’emergency’, for instance), coordinated the ‘compositing’ of similar motions and then assemble the result into an agenda. To make things even harder, CBC’s decisions are open to challenge (entirely appropriately, of course) by delegates at congress itself. At UCU’s annual congress in May/June this year, there were several such challenges to the CBC: in each case the committee’s chair, Alan Barker, was forced to defend its decisions, sometimes successfully, sometimes not. Of course, this is why the job seems thankless: because appeals to rules and deadlines to prevent motions being debated appears anti-democratic. And every time a CBC decision is overturned (a victory for democracy), the committee must readjust the agenda it has painstakingly put together.

But after the three ‘somewhat tumultuous‘ days of congress 2018, CBC’s chair emerged as something of a hero. In response to repeated attempts by some groupings within our union (both members and paid officials) to prevent the moving of two motions critical of the general secretary Sally Hunt, the chair of CBC insisted that congress delegates – who constitute the sovereign body of UCU decision-making – had on repeated occasions indicated quite clearly that it wished to hear the motions and debate them. Any attempt to thwart this will of congress was therefore quite out of order.

So when in Manchester last Thursday, at the beginning of UCU’s ‘recall conference’, this same CBC chair approached the podium to deliver his committee’s report, he received enthusisatic applause from delegates. The reason for the one-day event was to complete the business of the May/June congress which had to be abandoned following the walk-outs of UCU employees, led by the general secretary.

Many motions were, as we’ve come to expect from UCU congresses, wholly uncontroversial. (They can be viewed here.) Most were passed comfortably; few attracted serious dissent. Sometimes motions were so ‘obvious’ that no one even bothered to speak to propose them. We have no criticism of the content of these motions – they mostly dealt with important issues – but it does make us wonder whether there might be better ways to develop UCU and better uses of congress’s time.

But there were two highly contentious motions, of course. These were the two motions critical of the General Secretary that prompted the walk-outs in May/June. Much has changed in our union since that aborted congress. Most importantly newer activists – who have become more militant and more active since the USS strikes of February and March – have started to become more organised. (See, for example, this article in Times Higher Education and this one.)

But, also pertinent, our sibling union Unite had been drawn into the controversy over the leadership of UCU. For the UCU employees, including the general secretary, who walked out of the May/June congress were all members of that union – and their opposition to the critical motions being heard was presented in terms of protecting a union member from unreasonable workplace discipline. In the months since, that Unite branch discussed the issues more fully and agreed that the general secretary’s membership of Unite should not make her immune from criticism. In other words, UCU staff indicated clearly that they would not again prevent those motions from being heard.

The other relevant development since May/June was the announcement by Sally Hunt at the beginning of October that she needed to take a period of sick leave on account of a chronic illness (multiple sclerosis): in other words, the general secretary would not be present at congress to defend herself from any criticism.

The two contentious motions were Motion 10, expressing no confidence in the general secretary and calling for her resignation, and Motion 11, calling for her censure. [The full text of both motions is below.] Both were discussed by an general meeting of Leicester UCU on Wednesday 17 October, leading to voting instructions to us, the two Leicester UCU delegates.

Regarding Motion 10, the view of Leicester UCU (as expressed by a clear majority at Wednesday’s general meeting) was that we should abstain in this vote. In the event, the motion’s proposers (Exeter UCU) wished to withdraw it – on the grounds of the General Secretary’s present ill health. There was significant opposition to this at congress, i.e. many delegates remained in favour of discussing the motion, but the majority view was that the motion should not be discussed.

[Once a motion has been put on the agenda, it becomes the property of congress. This means that its original proposers cannot withdraw it at will. They can request to withdraw, but congress as a whole must agree to this.]

Re Motion 11, Leicester UCU agreed – again by clear majority – to instruct its two delegates to vote for this motion, i.e. in favouring of censuring the general secretary. Discussion at congress was, as you’d expect, very lively. However, it was supported by an overwhelming majority of delegates, with approximately 85–95% in favour of a slightly amended version. (The amendment removed an incorrect reference to the chair of the Higher Education Committee.)

1. the conduct of the USS dispute raises serious issues of accountability and process on the part of the national leadership

2. the General Secretary claims a majority of branches supported taking the unamended proposal to a membership ballot despite refusing to allow a vote on such a measure

3. UUK statements were presented as victories and recommended to members

4. repeated requests for documentary evidence of a tally of branches have been refused

a. this is representative of a democratic deficit in the union affecting members across sectors, manifested through a continuous pattern of unilateral, undemocratic action by the national leadership

b. our leadership should pressurise employers to accept the will of members, not the other way around.

Congress resolves to call for the resignation of Sally Hunt as General Secretary with immediate effect.

1. the decision [by the higher education committee chair – this clause incorrect and removed from carried motion] not to give branch representatives a vote on the UUK proposal at the 28 March USS meeting held at Carlow Street

2. the subsequent claim made by the General Secretary (GS) that the majority of branch representatives wanted an immediate ballot of members

3. the failure of the GS to provide any verifiable evidence to support this claim.

a. a member-led union requires clarity, transparency and accountability of its decision-making processes

b. the GS failed to meet these requirements in reporting the 28 March meeting.

i. to censure the GS for relaying branch positions at the 28 March meeting whose accuracy, in the absence of a vote, or provision of a detailed written list of positions, could not be verified

ii. to ensure that in future branch representatives’ positions are recorded in a clear and verifiable manner.