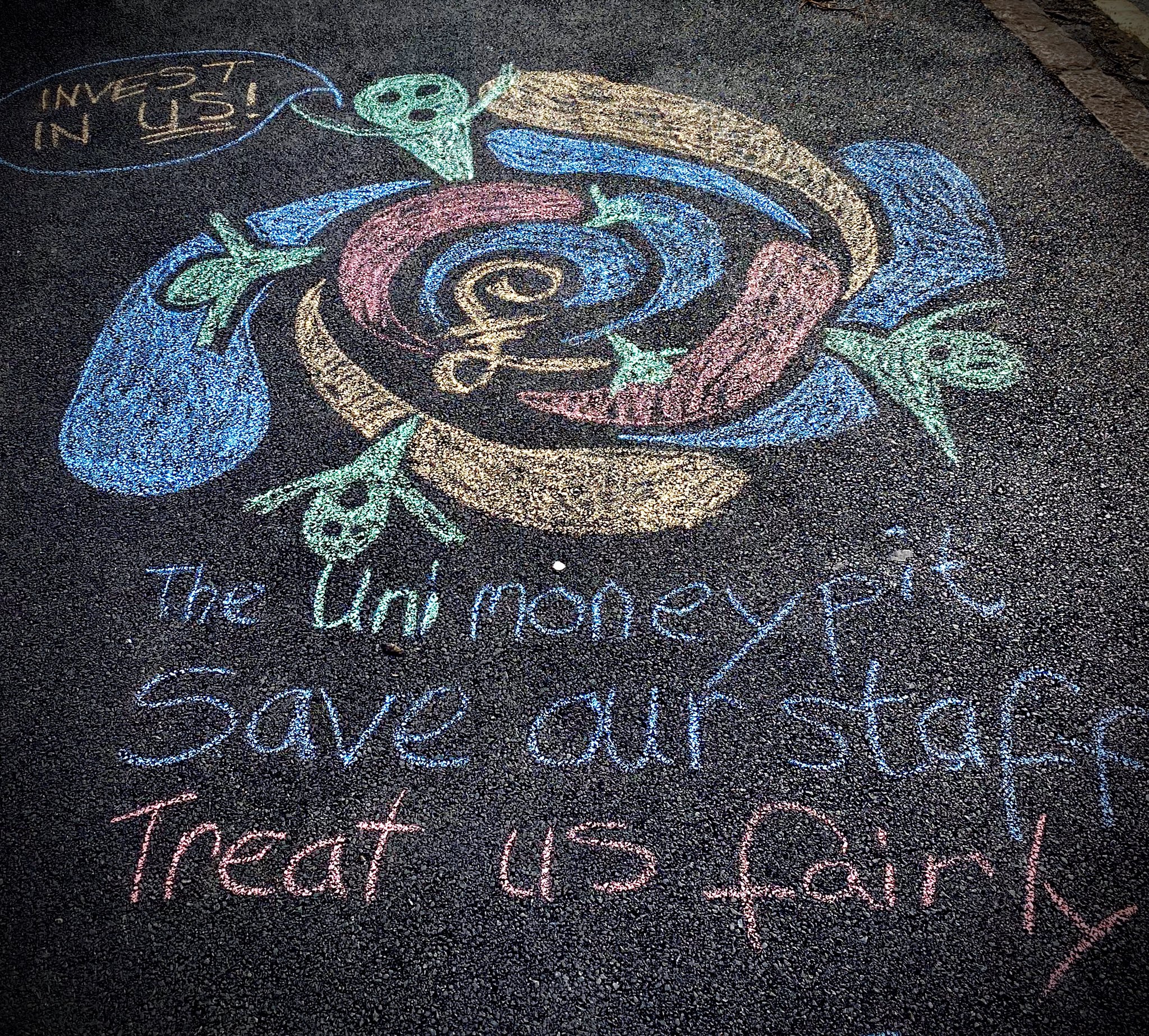 A member of professional services staff – and of Leicester UCU – explains why enough is enough.

For several days over the past week or so colleagues have been out in the grimmest of weather, showing their disgust at the way the University of Leicester treats its staff. I, on the other hand have been at home in bed, keenly following things on Twitter, when I would much rather be standing in solidarity with my colleagues on the lines. But why?

Well, it’s not that I’m ill, not that sort of ill, anyway – I haven’t got a temperature or a headache or the flu, nothing like that. What I am suffering from is burnout. I have no energy. Moving is hard. The thought of getting out of bed is exhausting in itself. I’ve been running on fumes for a while, but the tank is now empty, the fire is out, the steam has gone. It feels like not even the most skilful of firemen could restoke my blaze at this stage.

But how did it get to this stage? Well, let’s see.

I’m a member of professional services staff working in an academic department. I have a developmental role, a role that has grown a lot over the last few years. I lead on various projects, I manage staff and I contribute to corporate initiatives of one sort or another. (I do all this as a Grade-7 employee, obviously.) Over the last few months it’s just become too much, the demands have become too great and the pressure on me has grown hugely.

It’s not just me that’s been affected, of course. I have been without a line manager who was on sick leave for several months due to work-related stress. A central administrative team that I rely on to keep our academic programmes ticking over has been cut to the bone by the University’s senior managers. This means that remaining staff have also become sick through excessive workloads and stress.

I have a lot going on. On top of what I thought was my own ‘normal’ job, I also do the following:

And then there is my department. The department has grown rapidly. We have nearly double the number of students of only a few years ago. There are more academic colleagues than ever before and they require more support (they, of course, have their own issues). But despite that, the University leadership has actually cut our professional services team. I try to support my team as best I can, and Lord knows we’ve asked for extra help. But it is never forthcoming other than in the tiniest of measures. So not only has my own workload grown, I am also trying to support a team whose workload has also grown significantly. We are all thoroughly over-worked and under-resourced.

There seems to be no light at the end of this tunnel. For, of course, the never-ending neo-liberal growth agenda persists. It continues to cause more and more stress and anxiety to people who’ve now become accustomed to ever-rising targets, but never the new support or infrastructure that might make such growth manageable, let alone sustainable. It’s always winter, but never Christmas.

I have become stressed, exhausted and ill. The symptoms are physical as well as emotional. I’ve had eczema across my face, and painful dry skin on my eye lids. I don’t sleep well. Maintaining a routine is hard. I’m grumpy all the time and get upset at small things. I’ve had days when I have cried on colleagues and bartenders alike because it is all too much.

The University leadership, however, does not care. We ask for extra support, but the leadership insists that it is not affordable. The College has to save money, we are told, despite my department making money in spades. Most of this ‘surplus’ is gifted back to the central University. So where is it all going? What’s this money being spent on? How are the University leaders’ priorities so wrong? We have a vice-chancellor who has already earned by mid-February more that I will earn in the whole of 2020; we have lift shafts for new buildings towering above Freeman’s Common; we have a new Space Park, whatever one of those is… yet a full-time administrative assistant to support stressed staff in a growing department is, apparently, so utterly unaffordable. How can this be?

Yes, I’m cross about pensions being attacked when a raft of experts agree there is no need. Yes, I’m cross that my pay has fall in real terms every year since I started working for this university (no promotion route for people like me). I’m really cross about the way this organisation – or its leaders – has casualised its workforce and the way people are expected to graft for it without any sense of stability or ability to plan their future. But the thing that really gets my goat (today, at least) is workload. The unrealistic expectations of our leaders have left me feeling ill. They have contributed to many colleagues around me becoming anxious, stressed, seriously ill.

Enough is enough. The University leadership and its marketing team, its brand managers, may put out statements emphasing ‘core values of respect [and] partnership working’, but I see little respect for me, my colleagues or the students that we love working with so much.

We must make change. And we will make change. The power is ours and the University of Leicester is ours. We make it, after all. In this spirit, I hope that I will soon have recovered enough energy to be out on the picket line with all those brilliant colleagues that want to see change as much as I do.