At the end of last week, Paul Boyle wrote to all University of Leicester employees about the results of the 2017 staff survey – conducted in October and November. The timing of the release – Friday afternoon, when many employees’ heads were full of pension-dispute thoughts – led some to speculate that our president and vice-chancellor was trying to bury bad news. Here Leicester UCU’s analysts go digging into the report.

Every company CEO – or university president and vice-chancellor – enjoys a benefit-of-the-doubt period for the first couple of years of their tenure. The company – or university – is performing poorly, customers aren’t satisfied, employees are unhappy. But the leader pins the blame on their predecessor. The old boss made such a hash of things, left things in such a mess that it’s no surprise there’s disgruntlement. In fact – so this story goes – sorting out the previous boss’s mess is the very reason why such drastic changes are now needed. The new leader presents themselves as the messiah: all we need to do is trust them to make the ‘difficult decisions’, accept a little upheaval and uncertainty (maybe lose our job), and push on through to the promised land. It’s rarely true, of course, but the blame-my-predecessor ruse has a certain plausibility – and many CEOs – and university president and vice-chancellors – hope to have moved on to better things by the time their failures are discovered.

No surpise then at Professor Paul Boyle’s reponse to the 2016 staff survey, conducted 18 months after he became president and vice-chancellor of University of Leicester. The poor results – with his university performing worse than the HEI benchmark in 49 of 94 categories – were to be explained by the misrule of He-Who-Must-Not-Be-Named-Or-Have-A-Building-Named-After-Him. In fact, Paul Boyle used the poor results as further justification of his process of ‘Institutional Transformation’ – restructuring of departments, closure of parts of our university (the well-respected Vaughan Centre and the award-winning bookshop, for instance) and mass redundancies. Any unpopularity regarding Institutional Transformation could only be the result of a deficit of understanding on the part of employees: “We need to work on our communication with staff” – and indeed the survey’s authors highlighted ‘Communication from senior management’ as an aspect that ‘revealed the lowest positive staff perceptions’.

A year and a half on and no such excuses are available to Paul Boyle. The most recent survey was carried out in October and November 2017, more than three years into Professor Boyle’s tenure as the University of Leicester’s helmsman – but before the announcement of David Willetts as the university’s new Chancellor and before most colleagues learned of our VC’s role in the UUK-USS debacle. They do not make happy reading.

In his Friday-afternoon email, the VC says very little about the survey results except to offer us a poster of ‘highlights’. We reproduce it here with our own commentary. 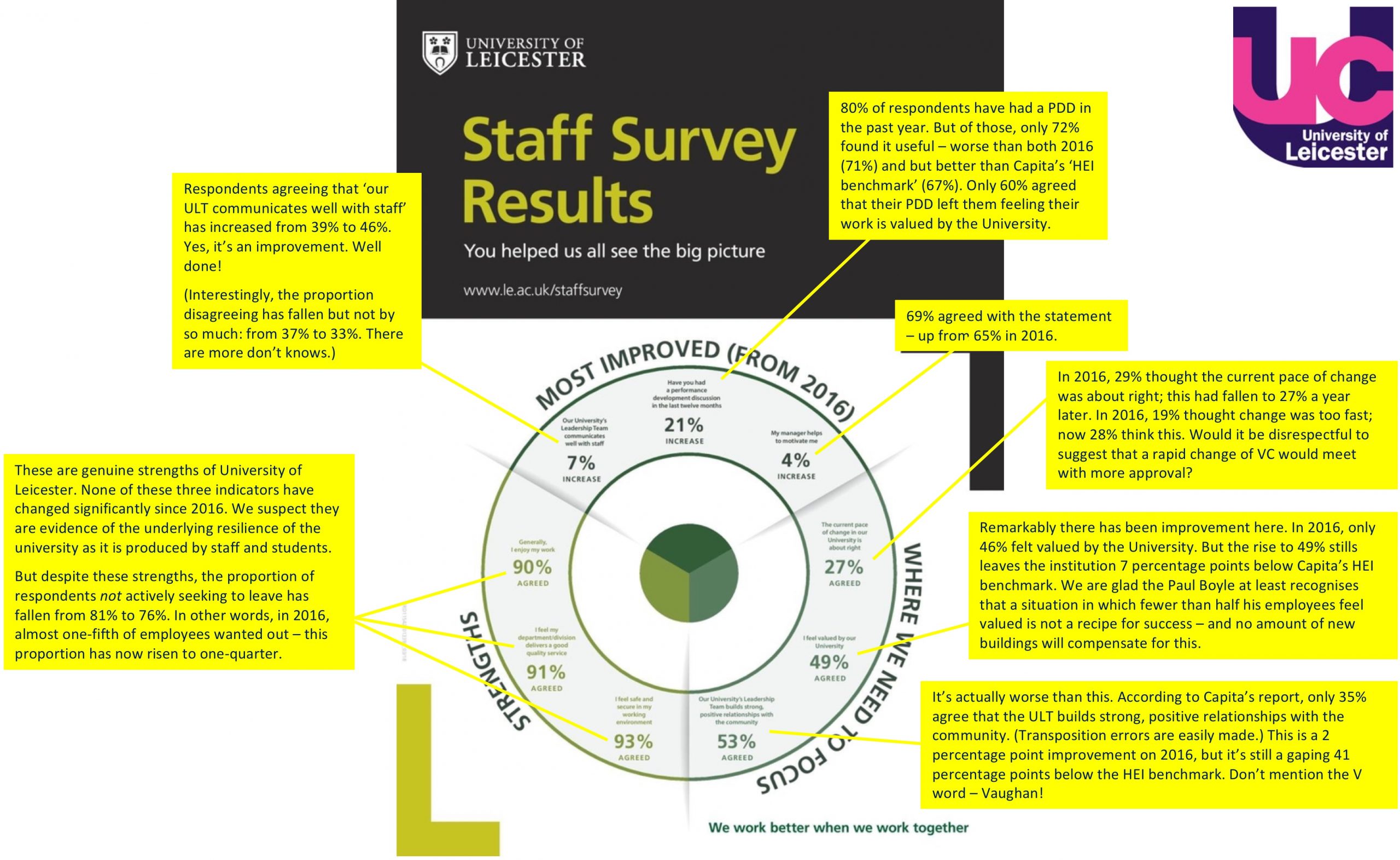 Most data can be interpreted in many ways, of course. For the 2017 staff survey data, the two main comparators are University of Leicester results for 2016 and Capita’s ‘HEI benchmark group’ – though unfortunately their report doesn’t say how many institutions are included in this group. In its executive summary, Capita makes quite clear that our employer has not done well whichever comparison we prefer:

The survey included 19 employee engagement and organisation climate measures which are benchmarked against the Capita HEI benchmark group. The benchmarking shows the University staff perceptions are better than the benchmark norm for three of these measures; seven are not considered statistically significantly different and nine show a result which is worse than the benchmark.

In the table below Leicester UCU presents its own ‘lowlights’: call them ten of the worst. These mostly illustate the point made by Capita in its executive summary. Take responses to the question our university is a good place to work. In 2016, our institution was at the benchmark, with 86% of respondents agreeing with the statement. In 2017, the benchmark had risen marginally, while the response for Leicester had deteriorated. Our employer is now 4 percentage points worse than the benchmark figure. For some question-statements, these effects are starker. The role of the university leadership team – for which we pay at least £1.5 million every year in salary costs – is to manage and to lead. But while the benchmark proportion agreeing with the statement our ULT manage and lead our University well has risen from 67% to 69%, the figure for University of Leicester – our university! – has fallen from 64% to 56% – from 3 points below the benchmark to 13 points below!

Even in the area of equality, of which our vice-chancellor has made a big deal – Stonewall Diversity Champion, Athena Swan, HeForShe – more than one-fifth of employees don’t actually believe their employer is committed to equality of opportunity for all its staff – a slightly higher proportion than 18 months ago.

We think we have all seen the big picture. Professor Paul Boyle is failing. He broke it – and he owns it!